Share All sharing options for: Adventures of the Big 12: New Year's Eve Edition 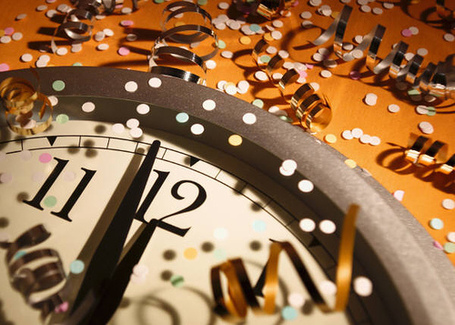 To celebrate, our friends from the Big 12 are back to bring in the new year with a bang, and they are getting down in Austin, Texas this year as the Longhorns have graciously agreed to host the party.

(A group is dispersed around a well decorated living room inside of a very pricy loft condominium.  A Michael Bublé CD plays in the background on a very expensive Bose sound system, while the guests drink fine champagne, laugh, and engage in rousing discussion.  There's a knock at the door...)

Texas:  The door's unlocked.  Come on in!

Texas:  Of course, nothing but the best for me.  Make yourself at home.  A few guys are watching the Chick-fil-A Bowl on my Godzillatron, Texas Tech and Oklahoma are in the game room playing Wii, and everyone else is just kind of lounging around.  Feel free to do whatever you like.  Drinks are on the house.  I have Krug...1995.  Amazing year.  You want a glass?

Texas:  Oh, be sure to have some of the wine and cheese.  It's sublime.

Kansas:  Seriously, dude, you have to try this.  I always thought that I was a wine and cheese guy, but that shit we get at Hy-Vee is nothing compared to this.

Missouri:  Uh, you think?  Texas has real money.  You have the illusion of such wealth and prestige.

Kansas:  That's crap.  Illusion?  We're trailblazers.  Everything about us screams of our unique tradition...

Missouri:  What are your school colors?

Kansas State:  Where did you get the idea to build Allen Fieldhouse?

Missouri:  I rest my case.

Texas:  Hey, guys, chill.  This is a friendly get together amongst friends.

(Oklahoma shouts from the game room...)

Oklahoma:  You're a dick hole.

Oklahoma:  Don't be sore.  You're just bitter that we're in the BCS Title Game, and you're not.

Texas:  You'll be sore after I shove that Wii-mote up your ass.  Now, Mizzou, is there anything else I can get you?  Are you hungry?

Missouri:  No, I should be good.  Thanks.

(There's a banging sound coming from the kitchen followed by grunts of frustration and then giggling...)

Texas:  Alright, well, I need to tend to the other guests.   We've got a limitless budget around here, so eat and drink all you want.  I think Texas A&M is trying to have sex with my toaster, so I need to make sure he hasn't electrocuted himself yet.

Missouri:  By all means.

Colorado:  Does anyone have a light?

(Everyone shakes their heads...)

Colorado:  Nobody?  None of you have a light?  I've got some sick sticky icky on me, and nothing to light it with.  Damn.  Alright, then, does anyone have something to drink other than this fruity champagne?

(Texas sticks his head out of the kitchen...)

Texas:  We've got some Shiner Bock.

Colorado:  (Sighs...) Does anybody have anything to drink besides fruity champagne and an overrated beer from Texas?  Ah, screw it, I'll just call some strippers up and invite them over.

Texas:  You'll do no such thing.  We don't dial up strippers around here.  We get escorts.

Texas:  I'll ring them as soon as I can pry Texas A&M away from the microwave.

Missouri:  He's not trying to screw that too is he?

Texas:  Oh, no.  He's just likes to see the light show that happens after you put tin foil in the microwave.  I'd prefer not to burn the building down tonight, so I need to tend to him.

Kansas State:  Who's supposed to be watching him tonight?

Kansas:  It's technically Baylor's turn, but he's skipping out tonight.  Something about not wanting to be around a bunch of drunken sinners...I don't know who is supposed to claim him.

Nebraska:  It was my turn over Halloween, and that sucked.  I ended up chasing him for three blocks after he disrobed and started running around screaming about how broccoli should be naked and free.  I have no idea what that means, but I figured that someone needed to restrain him before we found out.

Oklahoma State:  I don't know, Holmes.  But that guy in the hat looks wicked familiar.

Kansas State:  How much have you had to drink tonight?

Oklahoma State:  Dunno.  Maybe about nine or ten glasses of this (hic) wine...

Oklahoma State:  Whatever, I'm crunked out.

Kansas State:  Don't sweat it.  I'll make a beer run.  Anyone want anything?

Kansas State:  Yeah, I wonder why?  Seriously, though, who wants what?  Bud?  Miller Lite?  What?

Kansas State:  I refuse to buy that on principle.

Kansas:  Screw you.  Mike's Hard Lemonade it is.

Kansas State:  Whatever, man.  Just give me some cash.  What else do you guys want?

Texas Tech:  I'll have some PBR, and Oklahoma will have...hey, Okie, what do you want?

Oklahoma:  Hey, get me some Boones.

Oklahoma:  Whatever, pansy.  Enjoy your Tostitos.

Texas Tech:  Quit bickering like an old couple and get back to the game room.  I'm not done kicking your ass in NCAA Football 09 yet.

Texas Tech:  What can I say?  I'm awesome at video game football.

Texas:  Just bring the pies in and leave them on the counter over there.  I've got a hundred sitting on the end table over there you can take.  Keep the change.

Iowa State:  I don't know why I even bother.

(Iowa Sate heads over to the end table, grabs the hundred dollar bill, and leaves...)

Colorado:  Man, I hope he's quick.  I've got a sick case of the munchies.

Missouri:  Hey, your eyes are all red.  And you're mellow!  I thought that you didn't have a light?

Colorado:  A&M hooked me up.

(Texas A&M is over by the curtains and trying to light them with a butane lighter...)

Texas:  Whoa, whoa, WHOA!  How did he get a hold of that lighter?

Oklahoma:  Sorry, man, that was me.  He said he was going to cook up some food.  I'm hungry, and the cheese and crackers just aren't cutting it.

Texas:  God, we can't take you anywhere.  We should have sent you with the pizza guy.

Texas A&M:  I want curtain pizza.  GIVE ME CURTAIN PIZZA!!!

(Texas A&M threatens Texas with the lighter.  However, in the process, he burns his thumb...)

Texas:  That's it!   Go over there in the corner and sit down next to the ficus.

Kansas State:   Alright, I'm off to make the beer run.

Nebraska:  You can't leave yet; it's going to be Midnight in a minute or so.

Kansas State:  Well, I'm getting bored, and I don't want Kansas trying to kiss all over me when the ball drops.

Missouri:  Yeah, he does that.

Kansas:  What?  It's New Years.  You're supposed to kiss someone.

Kansas State:  I shouldn't have to explain this to you.

(Everybody screams.  A couple of people toss streamers and mess with various noise making devices...)

Oklahoma:  I want to win a BCS Bowl game for the first time since George Bush's first term.

Texas Tech:  I would like to get to a BCS Bowl game for the first time.

Kansas:  I'm going to win something without cheating...okay, maybe not.  I want to lose five pounds.

Kansas State:  I'm going to resolve to party like it's 2003 all over again baby!  Woooooooo!  Snyder!  Woooooooo!!!

Colorado:  You know, I'm going to try and field a competitive basketball team.  I'd like to see what that's like.

Nebraska:  You're giving up on football?

Colorado:  Well, when your program is being lead by someone that's a small step up, intellectually, from Texas A&M over there, you don't have much hope.

(Texas A&M nibbles on the ficus while conversing with a bronze statue of Bevo...)

Kansas State:  Haven't you resolved to do that for the last six or seven years?

Nebraska:  Yeah, but this time...this time it's gonna happen baby.

Oklahoma:  That's it?  Your only goal in 2009 is to get crunked and spend money?

Oklahoma State:  Well, I can't beat either of you guys, so I may as well do what I'm good at.

Texas:  Fair enough.  A&M, what do you resolve to do this year.

Texas A&M:  I pooped in your green toilet.

Texas A&M:  I pooped in your green toilet.

**On a serious note, everyone here at BOTC wishes our readers a safe, happy, and prosperous new year.  Except KU.  Screw them.