Share All sharing options for: BOTC Staff Editorial: Gary Patterson Is Our Choice 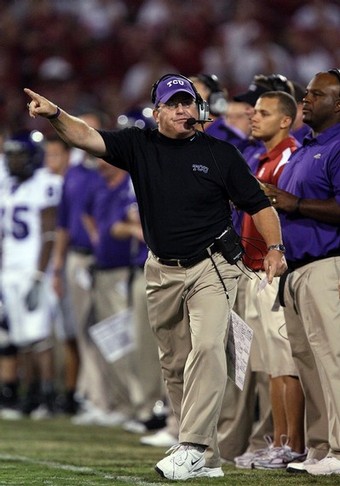 Fellow Wildcats, this is a turbulent time for all of us.  Today, our head coach stepped down from his duties.  Nobody knows who will be hired, and the rumors are swirling.  While there can be no doubt that many of the names being bandied about are qualified candidates who would do a fine job in Manhattan, we here at Bring On The Cats believe there can only be one choice.

Ladies and gentlemen, Gary Patterson should be the next head coach at Kansas State University.

Patterson is currently the head coach at Texas Christian University in Fort Worth, Texas.  In eight plus seasons at TCU, Patterson has amassed a 71-26 record, including three 11-win seasons.  He is 4-3 in bowl games.  Under Patterson, the Horned Frogs are 12-6 against BCS teams, with wins over Oklahoma and Texas Tech in that stretch.  This year's TCU squad is 9-1, with its only loss coming to Oklahoma, and is slotted 12th in the current BCS standings.

Defense has been a trait sorely lacking in K-State's teams under Prince.  By contrast, Patterson's Frogs are currently ranked second in total defense nationally.  They lead the nation in rushing defense, permitting only an average of 1.42 yards per carry.  Perhaps just as impressive, TCU is 22nd nationally in passing defense, giving up only 175 passing yards per game in the pass-happy Mountain West.

On a personal level, Patterson is a coach who could be a good fit in Manhattan.  Despite our deep love for Manhattan and K-State, we recognize that towns with a population of 50,000 in the Kansas Flint Hills are not for everyone.  But Patterson played football at K-State and graduated from the school in 1983.  He is a native of Rozel, Kan.

With the passing of the Ron Prince era in Manhattan, it is time to bring in an experienced candidate to lead K-State back to the point where it can be competitive in the Big 12.  That candidate is Gary Patterson, and he has the full support of the BOTC staff.