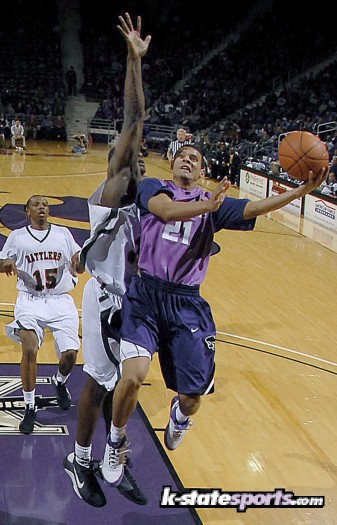 At some point, I'll find a better photo of the new lavendar jerseys and bring it your way, but for now you get Denis Clements sporting the two-tones.  I'm not entirely sure about the two-tone look, even though I know it's a nod to the history of K-State basketball and the uniforms worn during the glory days under Jack Hartman.  Maybe they'll break out the all-lavendar look, which I think would be a double dose of awesome.

As mentioned, the Cats handled FAMU easily tonight.  The backcourt duo of Clemente and Jacob Pullen led the Cats, and Dominique Sutton had a nice game as well.  While this team doesn't have any players of Michael Beasley's or Bill Walker's caliber, I still have a feeling they're going to be a lot of fun to watch.