Share All sharing options for: KU Sucks...I have proof! 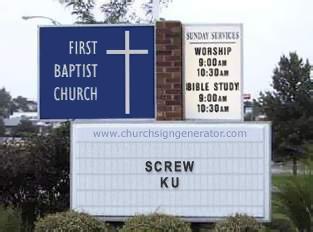 As some of you know, I'm a bit of a YouTube addict.  I spend more time than I'd like to admit scouring the Internet's video treasury for fun items, and on occasion, I like to share my findings with you.

Since this is KU week, and I literally loathe the University of Kansas, I figured that I'd share some good videos that I've come across over the last couple of years regarding this football series.

So, sit back, grab a soda and some popcorn, and view irrefutable video evidence that KU does in fact suck.

Here's a great one chronicling the 2002 matchup where KSU won the game 64-0.  This is the worst beating in the history of the series.

Oh, did I mention that it took place in Lawrence?

This next entry warms the heart of any KSU fan, and it probably makes most Jayhawk fans want to puke...

After KSU beat KU in Lawrence (yet again), Wildcat fans rushed the field and tore down the goalposts.

Let me repeat that: K-State fans rushed the field in Lawrence and tore down the goalposts...and KU let them.

This particular image is probably burned into the memory of every KSU fan.

Here's a great compilation of the years Snyder dominated KU.

So, there you have it.  Just a few samples of great videos out there proving, without a doubt, that KU sucks.