Share All sharing options for: Kicking the Tires: Oklahoma

Is it really worth illustrating how much better OU is, statistically?  Oh well, here we go anyway.

Well, I suppose maybe we can attack OU's passing defense.  That's our best hope.  Of course, if all we do is throw, the Sooner front seven will probably tee off on Josh Freeman, and who knows what will happen in that case?

Before I forget, how freakin' good has Sam Bradford been this season?  Those numbers are just ridiculous.  Also, I want to bring this up, because as I type this on a Thursday afternoon, nobody has mentioned it.  Josh Freeman has not thrown a touchdown pass since the first quarter of the Texas Tech game.  That's 11 quarters of action without a touchdown pass, and all 11 of those quarters were played against defenses that do not rank with the Big 12's top units.

Hit the jump below for my Big 12 predictions.  But first, of course, is my pictorial dig at OU before they thoroughly kick our asses. 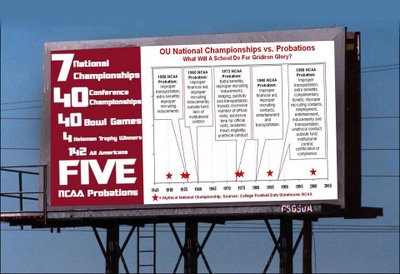 Texas Tech @ KU, 11:00 a.m. (ESPN): This is a big, big game for both the North and South title races.  A Texas Tech win would continue Tech's run at the insanely competitive South title, while a KU win would put a ton of pressure on Missouri to get back into the North race.  The 'beaks' defense is apparently susceptible to passing attacks, surrendering 468 yards to OU last week.  Graham Harrell put up more than 400 yards passing in two of three conference games thus far, and the Red Raider defense is playing better than it has in years past.  I think Tech pulls out a squeaker in Lawrence.

Baylor @ Nebraska, 11:30 a.m. (VERSUS): Baylor struggled mightily against Oklahoma State last weekend, but as you'll see in a moment, I think the Pokes are the real deal this season.  Robert Griffin is still the truth, and his throwing and running should give Nebraska a fair amount of difficulty.  That said, Nebraska has improved a bit the last couple weeks, hanging tough in a road game against Tech and thoroughly dominating Iowa State in Ames last weekend.  I see the Huskers sticking with their grind-it-out running game to get a boring win over the Bears.

Oklahoma State @ Texas, 2:30 p.m. (ABC): Is Texas ever going to play a game this season against a non-top-10 opponent?  What a stretch.  Okie State is having quite a run this season itself, standing 7-0 (3-0).  Texas destroyed Mizzou last weekend in Austin; Oklahoma State beat the Tigers two weeks ago on the road.  The biggest matchup in this game will be Texas' No. 2-ranked rushing defense against Okie State's No.5-ranked rushing offense.  Something's gotta give.  Don't ask me why, but this is my upset pick of the week, as the Pokes vault themselves into national title contention with a huge road win in ATX.

Colorado @ Missouri, 5:30 p.m. (FSN): Still licking its wounds from the loss of its national title hopes, Mizzou returns home to face ailing Colorado.  The Buffs have lost three of their last four and only scored 14 points in their one win in that stretch.  No matter the struggles of the Tiger defense, Mizzou should be able to outscore Colorado easily and get back on its feet as it prepares to slug it out with KU for the North division title.

Texas A&M @ Iowa State, 6:00 p.m. (FCS): The Aggies looked a little better last week despite losing at home to Texas Tech, while Iowa State seemed to be in a fog against Nebraska.  It's really anybody's guess as to what will happen in this game, although I'm inclined to pick the Ags to get their first conference win of the season.