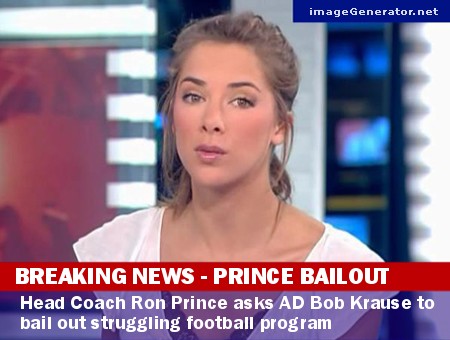 Manhattan, KS (BOTC Wire Reports) - Numerous sources inside the Vanier Football Complex and Anderson Hall confirmed to BOTC that Head Coach Ron Prince has asked Athletic Director Bob Krause for a bailout.  When Krause, puzzled, asked Prince what the bailout was for, the coach supposedly told the athletic director, "Well, if the Senate is willing to give Wall St. $850 billion, you can at least give me $400,000 to hire a decent Defensive Coordinator."

A Crisis of Epic Proportions

At the end of last season, Kansas State's defense began to rapidly devolve from a serviceable unit into the laughing stock of the Big 12 Conference.  In the month of November, the Wildcats lost all four games, and their opponents scored a combined 198 points (49.5 points per game).  The low point of the losing streak, a 73-31 loss to Nebraska in Lincoln, decreased fan confidence in Defensive Coordinator Tim Tibesar, and it put serious doubt in his ability to run a Division 1 defense.

Several theories were presented by football experts during this period, and most dealt with the defense's transition from a "Cover 2" scheme to a "3-4" base defense.   Others postulated that it was a lack of quality depth and injuries taking a toll after a long season.  However, most of those explanations were only tentatively accepted by fans.  Nonetheless, fan confidence began to return to somewhat pre-choke levels after heavy JUCO recruiting and a spring game that ended in a 3-0 outcome.  Furthermore, Prince's assertion that his defense was assembled to combat the spread offense inspired additional hope for fans that saw North Texas, Texas Tech, Kansas, and Missouri on the schedule for 2008. 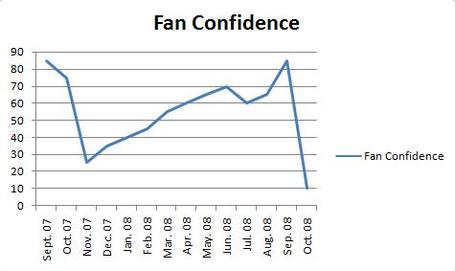 During the early part of the 2008 season, Prince's prediction seemingly came true.  In a 45-6 win against North Texas, a team that ranked 18th in the FBS a year ago in passing offense, the Wildcats held the Mean Green to 205 total yards.  Fans began to rapidly speculate that the JUCO experiment was a resounding success, and that the defense had improved to pre-suck levels.  Ultimately, fan confidence, which had steadily been on the rise after the malaise of the previous year had worn off, immediately shot up overnight based on the speculation.  While some experts warned that this might simply be a byproduct of playing a butt-awful team, fan confidence rose in spite of the underlying fear.

The following week against Montana State (a member of the FCS), a 69-10 victory, K-State held the Bobcats to 193 total yards of offense.  Again, without any true indicators of potential success against confirmed competition, fan confidence rose to unreasonable levels, and in essence created a ‘fan confidence bubble'.  This bubble continued to grow for ten days, unperturbed, until Kansas State's September 17th matchup against the Louisville Cardinals in Louisville, KY.

On a Wednesday night game against Louisville, the Wildcat defense was exposed by the Cardinals during a nationally televised game on ESPN2.  While the announcers held a three-hour discussion of the upcoming Ryder Cup, Kansas State was gashed for 577 yards of total offense, 303 of which were on the ground.  Most of these gains were due to missed assignments and broken tackles, and the confidence gained by fans during the previous ten months was immediately shattered.  Since they started keeping football records at Kansas State in 1993, there has never been a greater drop in fan confidence in a single day.

Hopes arose slightly that the following week's game against The University of Louisiana would inspire a bounce back of confidence, but after giving up 509 yards (335 rushing) to a team from the Sun Belt conference, fan confidence dropped to its lowest point since the Great Depression of Kansas State football (1896-1993).

Bold and Daring Action is Taken

After seeing fan confidence drop to its lowest point in fifteen years, and a conspicuous group of people wandering the streets of Manhattan with torches and pitchforks, Coach Ron Prince approached Bob Krause about the potential bailout.  While Krause listened to the request, sources say that his reaction was mixed.  An e-mail from Krause to University President Jon Wefald was intercepted and e-mailed to BOTC:

"In a way, I can see where Ron's coming from.  Tim Tibesar is awful.  I could throw eleven housecats on the field, and they would probably be more assignment sound and instill more fear in the opposing offense.  But, Ron got himself into this mess when he hired a guy whose only experience as a coordinator was at the Division 2 level for chrissakes.  He should have been regulating the defense on a more consistent basis.  His laissez faire attitude contributed to this mess, and I don't see why the hard earned money those folks on Main Street Manhattan, Kansas donated should go to fixing his mistakes.

"It's really a tough call.  Considering that we'll have a new University President in the near future, I need to make sure that I make the right decision in a selection year.  I kind of like this job, and hey, I didn't hire this guy.  Weiser did.  Blame him."

Coach Prince was unavailable for comment, but those same sources told us that Prince has been seen putting empty glass jars in all of the campus buildings with an attached label that says, "New DC Fund".  An accounting student with nothing better to do tallied up the collected funds, and he found that students and faculty across campus have donated $15.84 towards the effort.  This number takes into account an IOU retrieved from a jar outside of the Union coffee shop that said, "Ron, sorry dood, but we're coming up on a recession, and I needed money for a latte.  IOU $4.63.  Thx."

A closed door meeting is expected tomorrow between Coach Prince, AD Krause, and President Wefald to discuss the potential bailout.  When BOTC tried to contact Coach Tibesar at the Vanier complex, a player seeking anonymity told us that he couldn't come to the phone because, "TIbs is playing NCAA Football 09 on the PS3 right now.  He said he's played Texas Tech five times today, and he can't seem to figure out how to beat them."  As the player went to hang up the phone, another voice in the background was heard screaming, "Take that Tibs!  Dude, you are so [expletive] Saturday."

When further news breaks on this story, we'll pass it along.

Bring On The Cats would like to take a moment to clarify - We do not actually have any inside sources.  If we did, they wouldn't talk to me because I'd blab like a 14-year-old girl.